For a generation, Alan has been THE weather authority for the state of New Jersey.  He is a legendary forecaster - from his broadcast TV days in New York City to his 25 years with New Jersey radio stations.   Alan has often stood alone in accurately forecasting some of the worst weather New Jersey has ever seen.  His precise track of snowstorms, hurricanes, and other major weather events have allowed residents to properly prepare and undoubtedly saved lives. 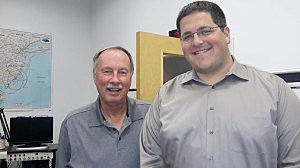 "He has been the most accurate weather forecaster at the Jersey Shore, and that is not an easy task given the unique complexities involved in weather patterns near the ocean," said Don Dalesio, Market Manager for the shore region. "Hopefully now he can enjoy 24 hours of his time in wonderful Seaside Park."

Dan Zarrow, a Certified Broadcast Meteorologist, will take over for Alan Kasper as Chief Meteorologist, with the goal to expand Townsquare Media’s digital weather content across online, video and social media.

“I’m excited for the challenge,” remarked Zarrow.  “I grew up listening to Alan (Kasper) and will work hard every day to provide the same level of forecasting New Jersey has come to expect.”

Originally from Jackson, NJ, Dan earned his degree at Cornell. His forecasting career has brought him from New Jersey to Oklahoma and back again.  Dan has studied weather his entire life, understands New Jersey’s complicated weather patterns, and will provide forecasts for all of Townsquare Media’s New Jersey radio stations and websites.  Dan’s most recent work includes News 12 New Jersey and the State Climatology Office at Rutgers.